Today I visited preview of Russian Art Sale coming up on Wednesday, June 8 in MacDougall’s auction house. This auction is a part of a Russian Art Week in London (3rd to 10th of June): leading auction houses such as Sotheby’s, Christie’s and Bonhams conduct specialised sales in Russian Art. A lot of events are happening this week such as art exhibitions, lectures and workshops celebrating Russian culture.

The auction house was packed today and it was nice to hear many conversations discussing artworks in many languages. This time the crowd was extremely diverse, and to be honest, it was a pleasure to see a lot of interest from non-russians.

There were different types of art: paintings, photography, sketches, icons and porcelain figures. Subject matters were also very diverse – landscapes of classical Russian sceneries, portraits, some works had a political themes. Some artists were not very well known, however, there were some artworks by famous Russian artists such as Korovin, Aivazovsky and Lebedev.

The exhibition was over two floors: the layout of the first floor was museum like showcasing artworks individually, lower ground floor was a bit overwhelming with a lot of works.

Overall, it was a very pleasant visit with a lot of beautiful art. Entertaintment-wise there was live music which also created nice atmosphere. The estimated prices greatly varied, so whatever your budget is you can find something suitable.  Enjoy the photos!

Korovin Konstantin, Spring in the Village, 1920

One painting particularly moved me. It is an oil on canvas “Three Sisters” by Nikolai Bogdanov-Belshy (1868-1945). To be completely honest, I have never came across with his works before, but there was something about it very touching. These sisters look calm and maybe a bit sad at the same time, but there is something about their eyes that made me stop and stand there for a while. 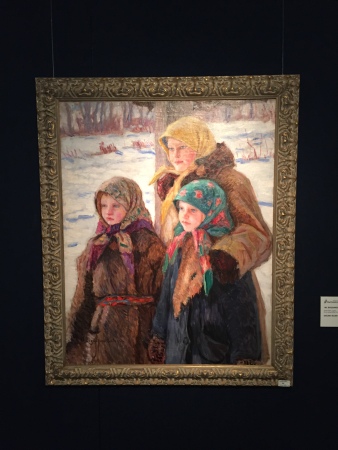