Royal Academy of Arts presents new exhibitions devoted to gardens pictured by Impressionist, Post-Impressionist and Avant-Garde. The title reads “Painting the Modern Garden: Monet to Matisse” which is on from 30th of January until 20th of April. The idea is to explore how did gardens develop in art through late 19th to early 20th centuries. When talking about Impressionist, Post-Impressionist and Avant-Gard usually french artists pop to mind, however, in this exhibition Monet’s works were taken as a starting point and  the subject was further developed by international artists.

Today was the first day the exhibition was open to the public and it was packed. Even though there are time slot allocations it was very crowded and a bit tricky to read captures and admire the paintings. Suggestions: it might be a good idea to go in the morning!

Gardens were a popular subject matter for late 19th century for painters as it became more common for society to spend leisure time in gardens. It was a protest against rapid industrialisation. Moreover, for the painting technique gardens are perfect for impressionists: it has bright colours, nature, natural light – all in favour to play and experiment with strokes and brushes.

Two large rooms are devoted to Monet’s early paintings at Giverny as well as his late works. Some paintings are “work in progress” and it is interesting to see two paintings of the same subject but in different colours side by side. The same bridge is painted in different tones: one is vibrant using bright greens and another one is done in pastel colours.

It is known that Monet was obsessed with lilies. There are 7 paintings of water lilies and not two of them are the same. Each painting has slightly different composition and amount of light.

There is also a greenhouse with flowers is the middle of the room as well as in every corner. It is a great idea how to support the subject by expanding it beyond paintings and by adding related journals, books, photographs and even live flowers.

One room is designed for visitors to learn more about the subject, there are tables with encyclopaedias and art books accessible to public, large photographs on the walls of different artists as well as short black and white silent film about gardens and how they were painted.

I overheard different conversations, some were about art (perspectives, textures, colours etc) but some people were sharing gardening tips inspired by the subject of exhibition.  Overall Royal Academy presented not so mainstream artists and it was interesting to see not so “traditional” impressionists techniques. 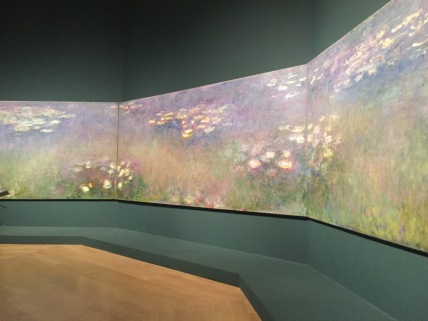