I have always admired Leonardo’s work, but my recent visit to Milan and seeing this piece with my own eyes made me want to discover more about it. I have chosen this painting because of its significance in art and its history. “The Last supper” is truly remarkable piece of art for many reasons: its subject matter, technique, color and value behind it.

Composition in this picture is complicated and sublime. There are 13 people in the picture having supper. There is clearly the center figure – Jesus in the very middle of the painting. Jesus is the key figure not only in the theme, but also composition-wise. He is sitting in the middle of the table with 6 people by each side. Leonardo da Vinci divided the whole crowd in the small groups of three. This is the first thing that grabs attention. 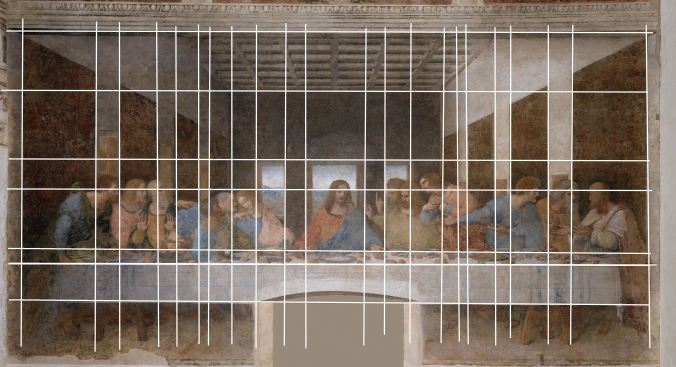 The long table consists from 3 lines: the bottom line and 2 lines of the surface. The next line is line of heads. It also happens to be Jesus eye line and the line of the horizon, which we can see from the windows in the back of the picture. The frames of the windows also create another line. The ceiling creates the top two lines and the final horizontal line is created by the fretwork.

Vertical lines are more regular and rhythmic, because panels on the walls and windows at the back mostly create them. We can also see how vertical lines of the wall panels are supported by tables’ legs and people’s feet.

All the figures are placed in the lower half of the painting, creating the illusion of high ceilings and large size of the room.

Space wise the painting is very complex and a lot of different techniques are used to create the illusion of three-dimensional picture.

The panels on the walls and the ceiling are most obvious lines that create the feeling of space. The less obvious lines are the arms of Jesus and combination of figures. It is shown on the picture by lines on the lower half of the painting. This technique is pointing out that vanishing point, the center of attention is Jesus. This is fascinating, because by painting his face at the vanishing point Leonardo implies the importance of the figure not only on the painting but also in subject matter.

Secondly, the illusion of space is created by shadows and colors. We can see that there are shadows on the wall and under the table, which adds to the effect. Moreover, the light is coming from the back windows, highlighting Jesus and the darkness of back wall.

Finally, usage of contrast colors on the figures and the walls creates space. Colors that fetch out each other, make the foreground come forward whereas background stays further away.

Leonardo was the first artist that implemented “chiaroscuro” (tonal move from dark to light in a graduated way) and “sfumato” (blurring of edges of shadows). We can see both techniques used in this painting: blurred shadows of the background landscape and gradually blended tone from dark to light on the walls.

Figures appearing to be three-dimensional because of their forms, they are directed towards each other, each of them has its own position, which makes them interacting with each other at different angles.

Colours in the painting are chosen carefully. Jesus wears blue and red cloths; blue signifies the sky and the purity, the truth, whereas red signifies fire, danger and also passionate heart. This combination of colors may correspond to the holly spirit of Jesus and the danger that about to come. All the colours except the clothes are calming and create peaceful atmosphere. Unfortunately, the colours are not bright as they used to be due to poor conditions.

Finally, the subject matter is thrilling and interesting. The plot is taken from a Bible and represents the reaction of 12 apostles when Jesus told them that one them would betray him. The subject is appealing to many people and shows the sort of breaking point of religious history. All the apostles are reacting in different ways; the sort of chaos and tension is clearly represented. However, Christ is sitting in the middle with his eyes down and looking calm and divine. This illustration is not typical for the last supper, because the space and the figures are interacting with each other. For example Andrea del Castagno’s Last Supper (1447) Judas is the only one is sitting on the opposite side of the table from Christ. Leonardo made the painting simpler and “close to the point”, because there is no unnecessary details on the background. The table in the painting is separating the viewer and the spiritual world where apostles live.

That piece of art has a lot to offer, starting with fundamental things like structure, ending with small details and symbols that appear in the painting. But even after short exam of the picture it can be said, that it absolutely perfectly represents the holiness of Jesus Christ, where the window is like a halo. He is painted in a way that it brings calmness and peace in the air. To achieve this, the master who painted it must be a true genius, which Leonardo da Vinci definitely is.